You are here: Home / Glossary of Acupuncture 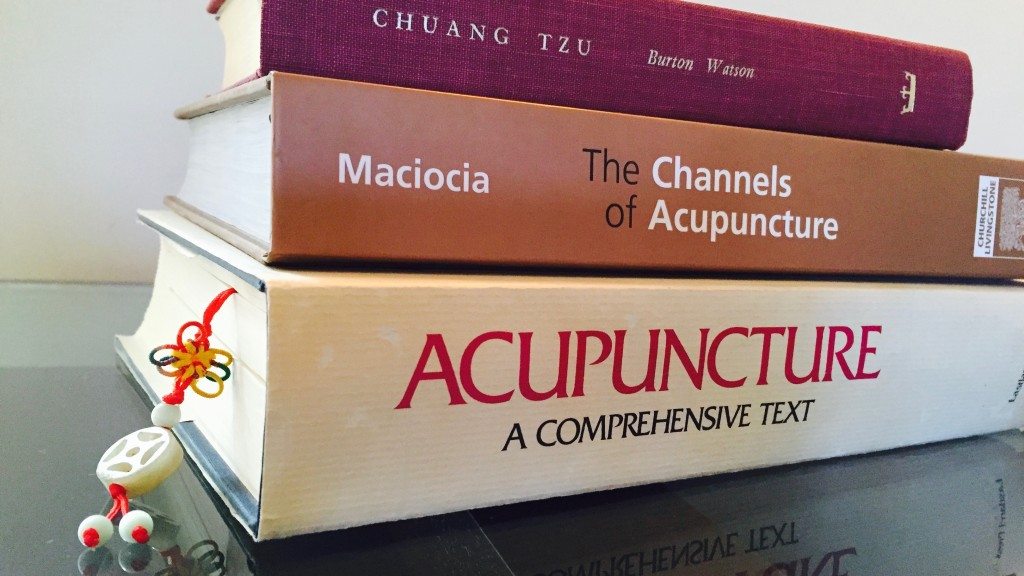 Why a glossary of Acupuncture Terminology?

Because an acupuncturist commonly uses words in an uncommon way. This glossary is simplified, and is intended to give an impression of the concepts used by acupuncturists, and how they differ from western medical concepts.

An acupoint can be one of over 1000 specific points on the body where a therapeutic modality (acupuncture, acupressure, moxibustion, massage) can be applied. An acupoint has a specific effect on the energy of the meridian or organ system. Acupoints can be located on meridians, or can simply be sore points (called “ah shi”). There are approximately 360 acupoints on the 14 major meridians and typical acupuncturists use about 60-100 of those points regularly.

Blood is used as a broad term to describe the physical blood in the body that moistens the muscles, tissues, skin and hair, as well as nourishing the cells and organs.

This describes a lack of blood with signs of anemia, dizziness, dry skin or hair, scant or absent menstruation, fatigue, pale skin, insomnia and poor memory.

Cold describes decreased functioning of an organ system and presents as any of the following: body aches, chills, poor circulation, fatigue, lack of appetite, loose stools or diarrhea, poor digestion, pain in the joints, slow movements and speech, aversion to cold and craving for heat. It is present in

all “hypo” conditions such as hypo-adrenalism, hypoglycemia and hypothyroidism.

The use of suction to increase circulation in an affected area to bring about pain relief. Cupping results in both a diagnosis (some areas redden differently than others) and treatment (the reddened areas benefit from renewed circulation). It is most effective for muscle strain, spasms or congestion.

Excessive fluids in the body with symptoms of abdominal bloating, loss of appetite, nausea, vomiting, lack of thirst, feeling of heaviness or being sluggish, and stiff, aching or sore joints.

A condition of dampness and heat combined with symptoms of thick yellow secretions and phlegm such as jaundice, hepatitis, urinary problems, or eczema.

A combination of herbs which is cooked or brewed to make a soup or medicinal tea. Some herbs can also be soaked in alcohol.

The use of low voltage electricity to stimulate acupuncture needles.

A theory describing the interaction of energetic and physical systems in nature and in the body. Traditional Tai Qi Quan schools relate them to footwork and refer to them as five “steps”. The doctrine of Five Phases describes both a generating cycle and an overcoming or restraining cycle of interactions. In the generating cycle, for example wood generates fire, fire generates earth, earth generates metal, metal generates water, and water generates wood. In the overcoming cycle, wood overcomes earth, earth overcomes water, water overcomes fire, fire overcomes metal and metal overcomes wood. Each element governs a series of related functions and structures: a type of movement, an organ, a body tissue, a season, a color, a negative emotion, a positive aspect, a sound, etc.

Plants (roots, rhizomes, twigs, bark, leaves, seeds, skin, flowers), animals/animal parts and minerals are used singly or most commonly in formulas to treat a condition. A typical formula consists of six to 12 herbs which create a balanced formula to reduce the possibility of side effects. A common instruction might be to take herbs 2-3 times per day for a few days, several weeks, or even months, depending on the condition. Although historically herbs were to be cooked at home and taken like a tea or soup, now they are available pre-made in capsules, tablets, liquid extracts or powders that can be dissolved in hot water.

Jing or Essence, is the substance responsible for reproduction and regeneration. It is believed to be derived from the energy inherited from one’s parents plus the energy a person acquires in daily life (from air, food and water). Jing regulates the body’s growth and development, provides for reproductive health, and works with Qi to help protect the body from harmful external factors.

The Chinese have identified a system through which vital substances (like oxygen and blood) flow in the body. These meridians or channels are named for their organ system. For example, the Stomach channel relates to the stomach organ. On the surface of the body, the Stomach Channel begins under the eyeball, runs along the face, head, throat, chest, belly, legs and ends at tips of the toes. Therefore it is used to treat problems of the stomach organ, and also jaw pain, headache, mastitis, phlegm conditions and knee pain.

The warming of acupuncture points with a dried medicinal herb, usually mugwort (artemesia). Moxibustion is usually applied to a needle or indirectly over the skin until a warming sensation is felt. You can read more about this on the moxibustion page.

You will often hear acupuncturists refer to a Liver, Kidney, Spleen or other organ imbalance. These terms refer to the physical organ as well as to the Organ System. For example, when acupuncturists say there is an imbalance in the Liver, they could be referring to a liver disease (the organ), or an emotional imbalance, eye problem or cyclical breast tenderness (organ system).

Phlegm may be a visible, sticky substance such as mucus or metaphorical description to indicate a disorder that causes a reduction in the flow of qi, and accumulates undesirably, as in weight gain.

soggy or slippery – relates to damp

Pronounced “chee”, this is the vital energy or life force which flows through the meridians and is used to protect, transform and warm the body. Qi is believed to control and animate the workings of the mind and body. As such, it plays an important role in traditional Chinese medicine. It warms the body and protects it from illness.

Qi is derived from two main sources: the air we breathe and the food we eat. Qi is believed to flow through the body via channels, or meridians, that correspond to particular organs and/or organ systems. Each organ, in turn, has its own characteristic qi (e.g., liver qi, kidney qi, and so on). Occasionally, Qi may become imbalanced due to depletion or obstruction. When this occurs, the function of organs or organ systems may be adversely affected, because of the body’s inability to transport or produce the Qi necessary to fight illness or infection.

Subdivisions of qi are:

Jing is inherited from parents

Yuan is constitutional energy and vitality

Wei is defense energy connected to the immune system

Zhong is energy supplemented through breath. It controls blood circulation, especially to the hands and feet.

A lack of qi which is seen with symptoms of lethargy, weakness, shortness of breath, slow metabolism, frequent colds and flu with slow recovery, low or soft voice, palpitations and/or frequent urination. It can also reflect a prolonged illness.

A set of exercises including meditative and physical movements. Used to move qi, thereby maintaining and regaining physical, emotional and spiritual health. It is considered an important internal cultivation.

The seven emotions are sadness, fright, fear, grief, anger, joy (extreme excitability) and pensiveness. These are all considered as potential causes of illness. Each emotion is associated with an Organ System, and can therefore be diagnostic. For example, someone who frequently gets bronchitis in the fall may have underlying grief issues. The Lung system is associated with both the Fall season and the emotion of grief.

The spirit and mental faculties of a person, which include the zest for life, charisma, the ability to exhibit self control, be responsible, speak coherently, think and form ideas and live a happy, spiritually fulfilled life. The quality of Shen is often observed in the eyes.

The six external evils, like the seven emotions, are also causes of illness and disease. The six external evils are terms from nature that are used to describe the condition. These include wind, cold, summer heat, dampness, dryness and fire. These terms are also used metaphorically to indicate the behaviour of a particular ailment or condition. For example, arthritic pain that comes and goes in various joints might be said to be a wind-type arthritis.

Stagnation is a blockage or build-up of qi, blood or phlegm that prevents it from flowing freely. It is a precursor of illness and disease and is frequently accompanied by pain or tingling. It can leads to lumps or masses. A fibroid is a type of stagnation.

Stomach Heat indicates too much heat in the stomach, represented by bad breath, bleeding or swollen gums, a burning sensation in the stomach, extreme thirst, frontal headaches and/or mouth ulcers.

This is the abbreviation for Traditional Chinese Medicine. Among the components of TCM are herbal and nutritional therapy, restorative physical exercises, meditation, acupuncture, and massage.

TCM is based on a concept of vital energy, or Qi, that is believed to flow throughout the body. TCM proposes that Qi regulates a person’s spiritual, emotional, mental, and physical balance and is influenced by the opposing forces of yin (water, for example) and yang (fire, for example). Disease is proposed to result from the flow of Qi being disrupted and yin and yang becoming unbalanced.

Tai Qi is a set of smooth, flowing exercises used to improve or maintain health, create equilibrium and keep Qi flowing. Originally considered a martial art and used for defense training, it is also now practiced for health. A multitude of forms are practiced, depending on the lineage and master.

Tao is the ancient philosophy of oneness in all creation. Pronouced “dao”, it literally means “the way” or “the path”. Tao is considered a force that IS, not a sentient being, but the life force that is everywhere, all at once, flowing through the entire world. THE ILLUSTRATED TAO TE CHING by Lao-Tze is the classic original script, written by one of the world’s most renowned Taoist masters. If you want a lighter introduction, then check out THE TAO OF POOH, by Benjamin Hoff; it’s easy to read, humorous and well-written.

This means to nourish, support or strengthen the condition of Qi, blood or a weak organ function.

This is defensive energy, the TCM approximation of the immune system.

Wind causes the sudden movement of a condition. Examples are a rash that is spreading, onset of colds, fever, chills, vertigo, spasms or twitches.

Yang represents heat and the body’s ability to generate and maintain warmth and circulation. Yang is associated with the masculine, life-force, energy, brightness, warmth, the ethereal, and rising up. Yang is what opens your eyes when you wake up; it is active.

Yang Deficiency is a cold condition due to lack of the heating quality of yang. Symptoms include lethargy, poor digestion, cold, lower back pain and decreased sexual drive.

Yin represents cool and the substance of the body, including blood and bodily fluids that nurture and moisten the organs and tissues. Yin is associated with the feminine, nourishment, dark, moist, coolness, substantial, and being calm, rooted or grounded.

Yin Deficiency is a heat condition that results in symptoms of night sweats, fever, nervous exhaustion, dry eyes and throat, dizziness, blurred vision, insomnia and a burning sensation in the palms of the hands, soles of the feet and the chest.

Zang Fu describes the solid organs (Zang) that store vital substances and the hollow organs (Fu) which are responsible for transportation.